Reaching out to a population with few resources 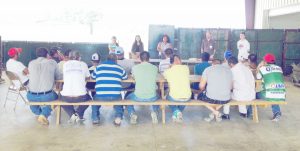 Patricia Morales has to work irregular hours in an abnormal setting to catch up with the patient population she serves. Those patients may be largely invisible to most Americans but their work is familiar to anyone who has ever smoked a cigarette or eaten an ear of corn or a strawberry.

Morales is the coordinator of Piedmont Health’s Migrant Health Outreach Program. From the Prospect Hill and Moncure Community Health Centers, where the program is based, Morales and her team members travel to more than a dozen rural counties in central North Carolina, meeting migrant farm workers where they live.

The Migrant Health Outreach Team meets with the workers and gives them health information – everything from “safe sex” practices to eligibility requirements for the Affordable Care Act health insurance. They screen the migrants’ health, including insect bites, needed medication and emotional well-being. They provide case management and advocacy the workers wouldn’t get otherwise.

“We’re trying to reach out and change some behaviors,” Morales explained. “It could be harmful behavior or it could be greater diligence to coming to health centers.”

But the greatest benefit from the program for the migrant workers may be knowing that someone cares about them and meets them where they live.

“To me, it’s personally important to reach out to as many as possible,” Morales said. She explained that she is an immigrant herself, having come to the United States from Honduras about 17 years ago. She knows what it’s like to be in their shoes.

“They don’t feel appreciated and respected,” Morales continued. “I try to bring to them some sort of sense of dignity. …They’re trying to live the American dream. It was very hard for me at the beginning, too.”

Team members travel throughout central North Carolina, meeting migrant workers in small groups – usually about 6-8 people. They meet in informal settings – generally in their homes or camps provided by employers – after the workers get off work, usually in the evening.

On an annual basis, the team has more than 3,000 encounters with about 1,600 workers, Morales said. Top concerns identified by the team are green tobacco sickness, an illness caused when tobacco leaves brush up against bare skin, as well as heat illness, pesticide exposure and chronic illnesses such as hypertension and diabetes.

The program has been recognized for its outstanding work. For instance, in 2014, the Migrant Health Outreach Program was awarded the Sister Cecilia B. Abhold Award by Health Outreach Partners for demonstrating excellence in health outreach services to migrant and seasonal farmworkers.

The work is not easy, Morales said. Finding places to meet can be a challenge and maintaining their attention after they have put in long, hard days in the fields can be difficult, she said, adding: “We have to be creative, respectful and appreciative of their time.”

Last year, when Australian TV came to America to report on the plight of migrant farm workers, the report focused heavily on North Carolina. At one point, a reporter and TV cameras tagged along as workers for Piedmont’s program held an outreach session with workers. The report showed workers gathered in a circle in a clearing outside their homes as workers provided information in a game show format.

“True or false: Alcohol is a good way to combat depression,” one outreach worker asked.

“Typically how many glasses of water should you drink per hour?” another asked.

The migrant farm workers laughed and teased each other as they vied to answer the questions correctly.

Later in the report, Catherine Crowe, an intern with Piedmont’s Migrant Health Outreach Program who was shown helping to lead the outreach session as well as conducting a health screening, reflected on her work.

“I think breaking that isolation is good for them, and a lot of times they’ll open up to you during that health assessment,” Crowe said. “You ask how many people in your family and they’ll want to tell you all their kids names and if they’re in high school or college and what they’re doing. You can tell they just want to get to know you and talk about your lives.”

The TV reporter also spoke with Jose Manuel Gonzalez, who talked about his life as a migrant farm worker. He said he is working to support his family back in Mexico, including three children, the youngest of whom is 5.

“We’re the first person they call most of the time when they have a problem,” she said. “It’s very rewarding to be part of their lives and to do something for them.”

Even at the end of a long, day of physically intense work in the brutal summer heat, workers are appreciative, Morales said. She added: “The most common response from workers is, ‘Thank you very much for the visit – don’t worry about the time. You are the only people who visit us and care about us.”

To Jo Ann, Piedmont Health’s medical care was like a life-saving miracle

Reaching a milestone is cause for celebration

Her passions keep her going

Family finds support and friendship at a community health center